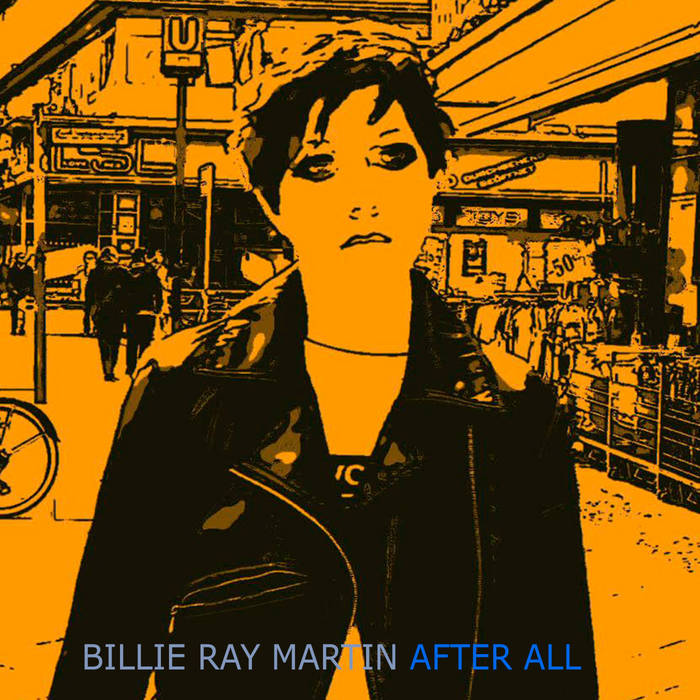 Ronald van Veen This is how much I like it:
www.pmachinery.com/modules/news/article.php?storyid=2594 Favorite track: After All (Original Version).

Jarrod Leeds It was hard to choose an absolute favourite track, but this mix wins by a whisker. I love the haunting and classy vocals. I definitely want more from Billie Ray Martin. Favorite track: After All (Mijk van Dijk Remix).

Post-Punk Monk BRM has kept the varispeed “Oh by Jingo” refrain from the original, but the rest of the music bed is a dryly delicious spectral house version of this song by collaborator Abdullah Al-Wali [Dark Storm] that manages to bring it forward into the 21st century, where it belongs. Her chorale of multi tracked backing vocals are beyond superb. It’s yet another winner [there are no losers] from the finest voice of her generation. Favorite track: After All (Original Version).

daryl white The Best cover of the David Bowie song I have heard since I was 15 , very atmospheric and it feels like a journey when im listening to it , great. Favorite track: After All (Original Version).

A spontaneous idea while in a writing session with Dark Storm (aka Abdullah Al-Wali), Billie casually recorded demo vocals for this Bowie cover. To record the song had been on Billie’s ‘to do’ list for a number of years and Abdullah’s production vibe lent itself perfectly to the idea.

Billie and Abdullah had come together by chance, after Billie had received the Dark Storm album promo and replied that she loved it. Soon after, they got together for a week in Berlin to work on song ideas.

Billie had a certain sound in mind for the mix of ‘After All’ and managed to create something in the studio that surpassed her own expectations. Not designed to service dancefloors in an obvious way, it still manages to create a ‘back to the roots’ groove... anyone uttering Electribe 101?

Legendary House and Techno Pioneer Mijk van Dijk’s mixes give this release a serious old school house vibe with an Electribe 101 feel, while the chilled Caesar Gergess Dub adds the theremin (!!) and jazzy trumpet to the package.

supported by:
BBC Radio 6, Galaxy Radio
Luke Solomon: A spectacular vocal over some brilliantly haunting house music. whats not to love. full support from me both club and radio.
Aerea Negrot: This is Hot!! It's a trip!
Zerocrop: Majestic! Peerless!
Severino (HMD-Classic-Hot Creations): A great interpretation of a David Bowie song. original is mysterious and sexy. Really like Mijk Van Dijk rmx. Sexy and perfect for a 6am set. Electribe 101 vibe(ish). Top job!
Kim Ann Foxman (Hercules and Love Affair): Really nice release!!! I'm really feeling the Caesar Gergess mix! its really deep and fresh. i also really like the Mijk van Dijk mixes a lot too! nice one!!! Billie sounds great.
Dan beaumont (Dalston Superstore): Gorgeous. I love the aesthetic of a simple kick and juno bass (?) combo at the start and the way it develops. Love the vocal of course. Original above the remixes for me
Simon mills (Napoleon): LOVE the tracks. They are completely what I'm into - can hear a little homage to Electribe in there with the brassy pads and minimal basslines... very atmospheric, so obviously I will be really into them! Great stuff.