The Crackdown Project, Vol. 1 & 2 (Sold Out to Disco​/​Darkness Restored) [Remastered] 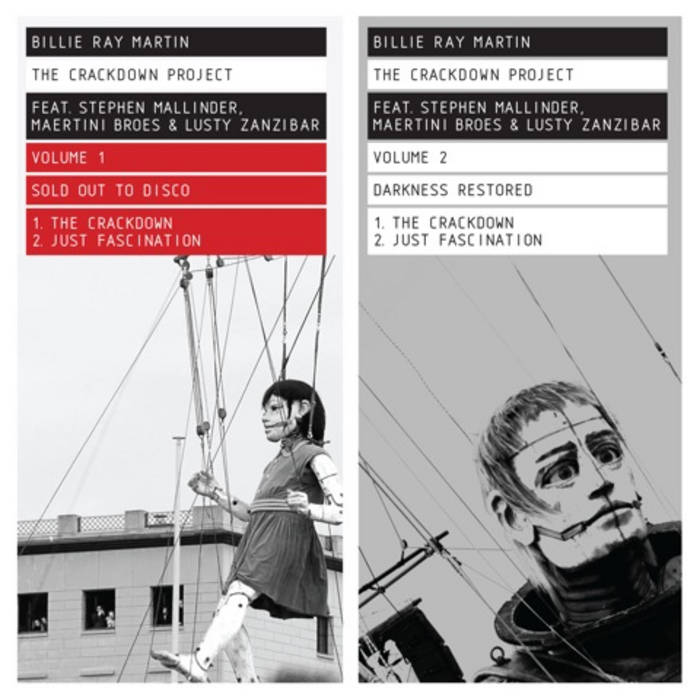 plebc what is there not to love???

When Billie Ray Martin told Stephen Mallinder she had just finished the job of selling out Cabaret Voltaire to disco, he burst out laughing. The legendary head of famed electronic band Cabaret Voltaire saw no reason to stop her. Instead, he agreed to deliver his first vocal performance in years on Billie’s cover of the Cabs’ song ‘The Crackdown’. Produced by top Berlin tech-house act Maertini Broes, this production brings Billie Ray Martin back to her cutting-edge house music roots.
Second in line to be out-discoed was the song 'Just Fascination'. This time, the UK's finest Nu-Disco producer Lusty Zanzibar delivered the production. The result is a no holds barred epic groove fest with a Balearic touch.
Remixes were delivered not only by Billie's 'Your Loving Arms' co-writer David Harrow (under his Oicho moniker), but also by super-blog Audio Porn Central's top remix team:
Celebrity Murder Party, Copycat, Divide and Create, Dunproofin, Flying White Dots, Phil RetroSpector, Year Zero have all delivered something that goes beyond mere remixing but they have created stunning artistic reworks of these classic songs.
Released on Billie's Disco Activisto label, which she has re-launched for this and all future releases.

Stephen Mallinder: "Billie and I had been planning to work together for a number of years and now we finally did it."

BRM: "I could never do justice to the original songs but can have a damn good time trying."