Talking with myself (Original 8​-​Track Demo) 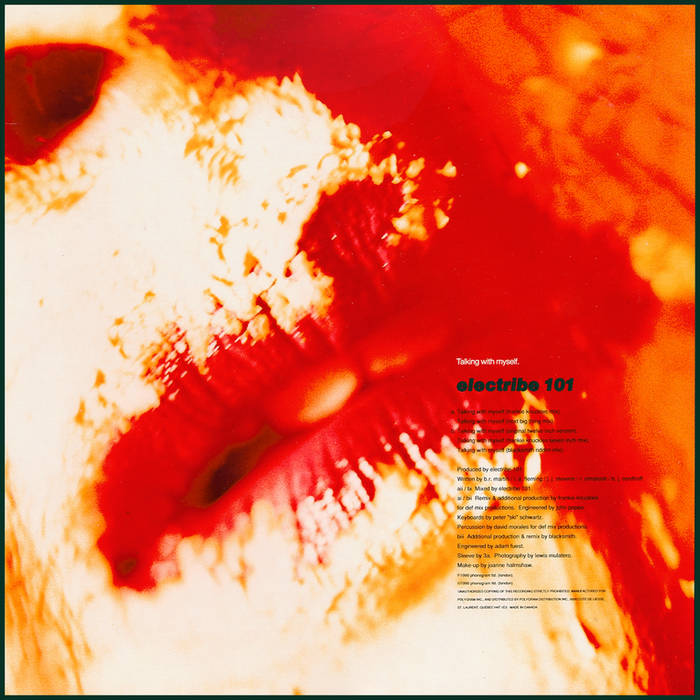 Nancos And this was supposed to be a demo. WoW-wah!

José Ramón Crespo Arce As far as i can see (hear), the demo was very close to the original classic. Nice to listen to it :) Thank you Billie.

The band famously and widely reportedly met after I'd placed an ad in the Melody Maker entitled: “Soul Rebel seeks Musicians, genius only”.
I got a telephone call and four guys came from Birmingham to meet me. Allegedly, and probably true, I told them I wasn’t interested and sent them on their way, but Brian of the band kept calling. He convinced me to come to Birmingham, and off I went .We listened to music, and found that indeed, we had more in common than I had assumed. There was house music in the air and all of us at that time across the globe were re-defining the way we wanted to write and record music. I remember us listening to Bomb the Bass, amongst other influential records, and deciding that this is what we wanted to do from here on.
A little while passed… cut to the Wag club. I was out raving one Saturday, as always, when Julian Jonah’s ‘Jealousy and Lies’ sounded through the speakers. I even remember where I stood. It was on the winding staircase, going down. I stopped and just stood there, staring, mesmerised. When the record had ended I proceeded to run around the club asking if anyone knew what that record was. I tried to reach the DJ but didn’t succeed. It took a few days and I found the record. Put it in a bag, went to Birmingham and said: “This!”
We pretty much just copied the record and I had brought a song I had written a while before, entitled: ‘Talking with Myself’. The guys built the arrangement around the song.
The result was the demo. This was prior to automated desks with total recall, so the mix, as with all Electribe Mixes, was put down onto tape ‘Live’.
The four guys would all stand hunched over the desk pushing buttons and the results were left just like this and not edited.
This is how the album was later recorded as well.

Brian went to London with the demo as he was certain that a friend of his at Phonogram would be interested in this song, and he came back pretty much with the deal.
Simultaneously, some independent radio stations had gotten hold of the white label with the hand-drawn snake that we had pressed up and everyone went nuts about the record.
People found out that we had signed to Phonogram and the company received call after call from angered radio stations and magazines asking where the record was and why it had not yet been prioritised or released properly. This was fun for us to experience of course, as the buzz was so strong.
Phonogram took a while longer to prioritise the record, namely when major manager Tom Watkins came onboard, but that’s another story.

Later, prior to the official release of ‘Talking with myself’ Phonogram put us in a studio where I was supposed to re-sing the vocals. I did, but insisted that the recording was not as good as the demo vocals. The band disagreed but I told them I knew. The next day I received a call and was told I was right. So what you hear on the 8-track demo is pretty much the same recording (as far as I can now tell) as what ended up on the official single, with perhaps some bits from the new vocal recording edited in. I am not sure. It's possible that I recorded another vocal in the studio in Birmingham. I think there are some minor differences in the vocal performances.

Luckily this demo doesn't have the 'Mission Impossible' part, which I thought was naff, and was always against.

The rest, as they say, is history.

With all the stars so bright and the light shine down
And everything glows all around
In a wonder world and a perfect town for loving, yeah
And when it all gets hard and it all gets tough
And everything won't be enough
We're gonna throw a stone and it'll all come true for loving

Oh, with all the stars so bright and the lights shine down
And everything glows all around
In a wonder world and a perfect town for loving
And when it all gets hard and it all gets tough
And everything won't be enough
We're gonna throw a stone and it'll all come true for loving

Because, with all the stars so bright and the light shine down
And everything glows all around
In a wonder world and a perfect town for loving tonight
And when it all gets hard and it all gets tough
And everything won't be enough
Were gonna throw a stone in it and it'll all come true for loving yeah

I'm using here, of course, the famous image by Lewis Mulatero and the artwork of Mark Farrow.